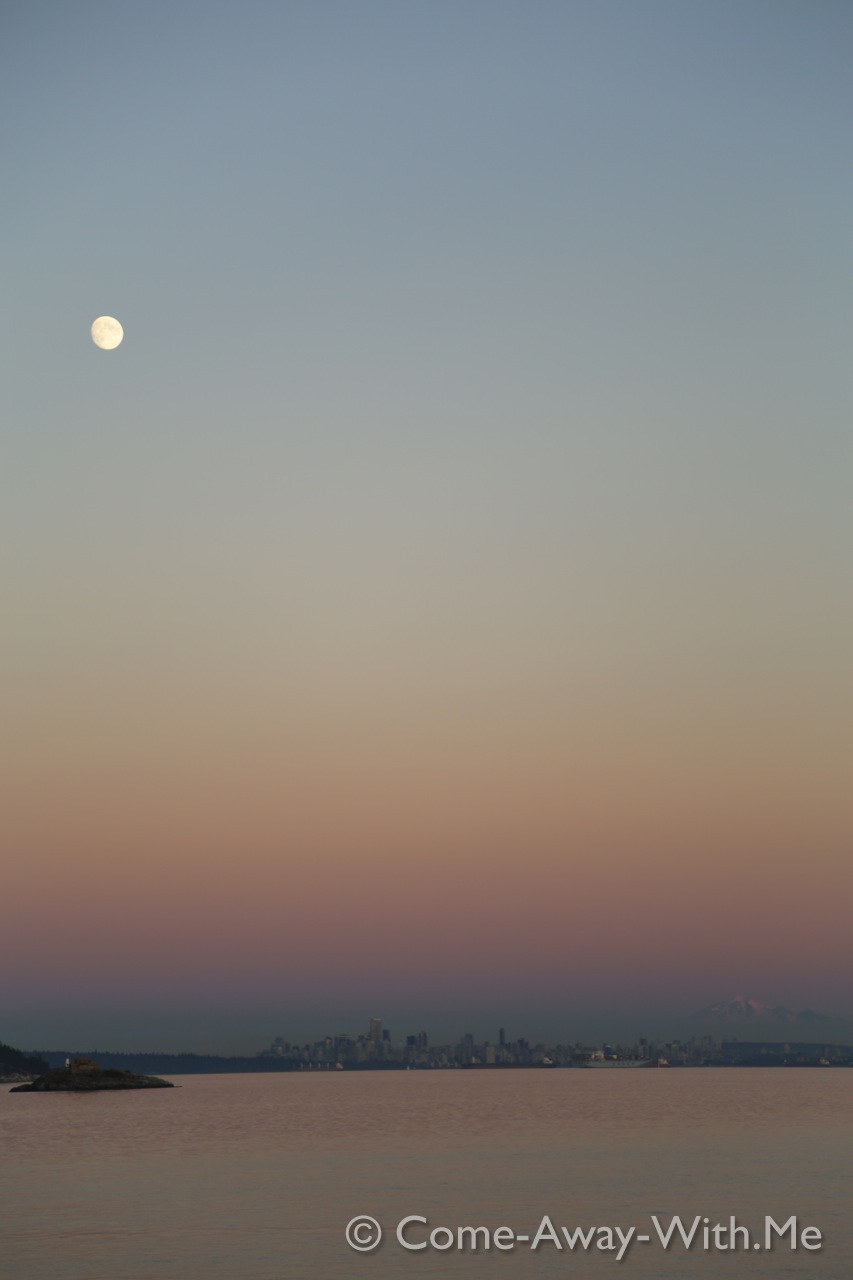 After those 3 days kayaking on Vancouver island, we had one wish: a hot shower! So we headed pretty quickly to Vancouver to visit my cousin Samuel who moved there last September. The cruise on the ferry in the late afternoon was amazing with the sunset while approaching the city, and the sky changing colors. Moreover we would see the moon clearly over the city which made a perfect welcoming for us.

We arrived at my cousin's place in Vancouver, at a very nice location I must say. And we rushed for a first shower after those days kayaking. Samy did us a good diner, and his housemate gave us his room for the 2 nights we stayed. Laundry, sleeping, emails, skype calls, chilling out... The time went very quickly and Saturday morning we were all 3 on our way to Whistler for a week-end of biking. We stopped by (for quite a long time) at Mountain Coop to buy finally only a few things, but warm, to survive the rest of our "northern trip". It was beginning of October and we still have a few hundreds kilometers to drive up North to Jasper.

We arrived in Whistler, went around to decide where we would rent our moutain bikes, but the place I knew was closed, with the SantaCruz's rental. So we ended with basic, simple bikes, but enough for what we would do during 24h. We went with friends of my cousin for a little warm up loop in the forest next to the parking, for them to know those very funny loops, and for Lory to get used to her bike for the next riding day.

We met up with my friends Ignasi and Anni, who used to live in Whistler and just happened to be there on holidays for one week. Perfect timing! We had diner and after went to see two ski movies from Teton Gravity. As usually, a ski movie show doesn't come only with movies, but with its set of give-aways / presents. Before entering the show, I saw we had the tickets 213 and 214, and I don't really know why but I wanted to have the one finishing with "13" that Lory had. So we swept them. We also put our names on small forms to win different things during the evening, not knowing really what, but you know, it's all about skiing, so it can only be good ;-) At diner before, we were talking about luck, and Anni who uses to win almost all the time something as Ignasi was telling us. And apparently her dad as well. So the lottery started to give out the first most simple presents, and they were switching between picking a name from the paper forms, or a ticket number for the night. And guess what, yes, Anni won a week ski pass reduction. So, yes, it was true, she wins very often. Then they went on for a pair of nice skis, big fatty one. And then they presented the ultimate present of the night, a free heliski day in Haines, Alaska. They were gonna pick up a form, but many people shouted to pick up a number. And here we go.... Number "213"! I was pumped! I'm really not the usual winner as Anni. But I just got a free heliski day, one of my dream! When we were watching the movies, I was thinking of myself, there in Alaska, as the movies were about AK, skiing down those incredible steep slopes I've always been dreaming of on my pair of tely.... But it will have to wait, too many travels ;-)

On Sunday we went all together biking on some of the Whistler cross-country trails, and had a good fun with the usual flats and other bike problems. Nevertheless I was happy to bike again with Ignasi, Anni, Lory, Samy and all the others. My cousin had been living in Vancouver for already one year, and he never went biking in Whistler. I couldn't let him missed any longer what he already should have known for a long time.

Monday morning, we were moving towards Jasper to see the National Park.